“Gene serves as an example of why the American worker is the most productive in the world,” says Jim Morando, president of Mansfield Plumbing. “He’s a guy whose work ethic includes dependability and dedication to his craft. We’re fortunate to employ him and many others with high personal standards at Mansfield. Their reliability and commitment have helped make us a leader in this industry.” 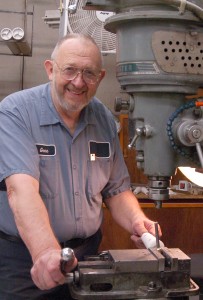 For  more than five decades Gene has created a career at Mansfield, starting first in the tool room, then moving after 29 years to the brass tool room, and then, in 2007, to his current position as a case maker in the model shop. He has produced everything from plastic injection molds to jigs to capillary rods as the company’s most senior employee.

“Mansfield is a good place to work, with friendly people and steady work,” says Oswalt, a resident of Perrysville, Ohio. “I’m hoping to remain healthy and able to work at least until 2017, which will be my 55th year with the company.”