It’s easier than you may think to replace a toilet in your home. And, it’s fast. Just ask a few homeowners who tackled the DIY project recently. 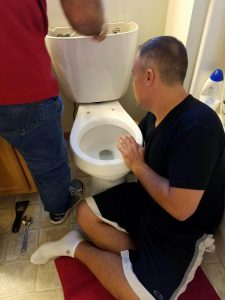 “My boyfriend and his father took out an old toilet and replaced it with a Summit Dual-Flush toilet in less than an hour,” says Misty Davis with Everything Changes blog site. “We selected this toilet specifically because of the dual flush option. We had problems getting toilet paper and waste down with our other toilet. This new toilet saves water by using just 1.1/1.6 Gpf and efficiently removes solid waste when the second flush button is chosen.”

In Oregon, Laurie Adams reports that installing a Denali toilet was “super easy and quick.”

“On a scale of 1 being difficult and 5 being super easy, I would give this project a 4,” says Adams, with Emily Reviews blog site. “I actually had to ask my husband to slow down so I could take pictures. The entire process took less than 30 minutes.”

Both Davis and Adams have written reviews of their Mansfield toilet installation experiences. To see the step-by-step blog postings, go to http://mistymorgan.blogspot.com/2016/11/mansfield-plumbing-summit-dual-flush.html and http://www.emilyreviews.com/2016/10/mansfield-plumbing-denali-toilet-review-giveaway-us-canada-1103.html.