As part of the 2016 Summit Sweepstakes: Road to Freedom, Mansfield gave away five Milwaukee® 9-Tool Combo Kits and 25 Outback Steakhouse® $100 gift cards. Thirty-one prizes were given out to winners nationwide. The more Summit toilets purchased during the sweepstakes timeframe, the more chances licensed plumbers and contractors had to win a prize.

Wholesalers were also encouraged to participate in a 2016 Scratch N’ Win promotion that ran in conjunction with the 2016 Summit Sweepstakes. Every time a wholesaler sold a Summit toilet during the promotion and entered their customer for a chance to win in the sweepstakes, they received a Scratch N’ Win card. 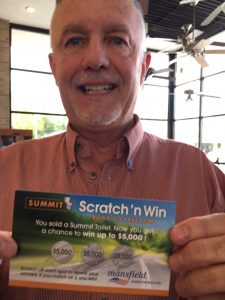 A 42-year employee at Wholesale Supply, Landolt has been selling Mansfield products for as long as he can remember. “I’ve won the $25 scratch off before and someone else here has won $250 but I never thought I’d win the $5,000!” says Landolt. “I kept shouting ‘I DID IT’ and everyone got excited. Now I’m going to pay off some bills and maybe take a cruise with the prize money!”