Veteran’s Day has special meaning at Mansfield Plumbing. It’s a day to honor 49 employees in the company who have served more than 300 combined years in the United States military. 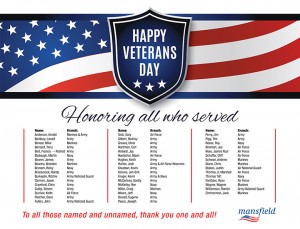 “We have 538 manufacturing employees at our facilities in four locations across the country, so it’s impressive that almost 10 percent of our workforce has served in the military,” says Jim Morando, president of Mansfield Plumbing. “We’re exceptionally proud of all our employees. However, we’re both proud and grateful for those who have defended our country by dedicating their efforts to military service.”

Morando relates that more than 90 percent of the millions of sanitaryware pieces made each year by Mansfield Plumbing are Made in America at locations in Ohio and Texas. “We are a strong supporter of bringing jobs to Americans, supporting our economy and our workforce,” says Morando. “Having so many veterans working at Mansfield is a responsibility and a privilege.

“That’s one of the reasons why our company supports the Building Homes for Heroes program. We donate sanitaryware and bathware products to homes being created for injured service men and women returning from wars in Iraq and Afghanistan as a way to honor the contributions made by our employees.”